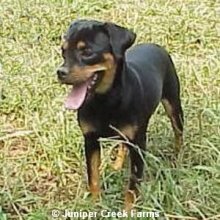 The Carlin Pinscher is a mixed breed whose main sources are the Miniature Pinscher and Pug (another such mix is the Muggin), with some other breeds later mixed in, such as the Boxer. Pinscher is German for Terrier and Carlin is the name used for Pugs in some countries. The Carlin Pinscher is a very new breed which is still in development and not yet recognized by any major Kennel Clubs. In 1992, French breeder Isabeau Morgan and Hawaiian breeder Kawika Buenafe left their champion red Miniature Pinscher with their black Pug when on vacation. When they returned, they found that the dogs had bred, resulting in three puppies which had the appearance of a small Rottweiler. Grant Milionta was given one of these puppies, named Snooz, and grew quite fond of it, deciding to establish a new breed upon this line, called the Carlin Pinscher. Isabeau Morgan, Kawiki Buenafe, Grant Milionta, and others are now working with these dogs to establish a line of Carlin Pinschers which can be applied to the major Kennel Clubs.

The Carlin Pinscher has a short, sleek, smooth coat that sheds a moderate to low amount. Its coat is similar to a Miniature Pinschers, but it is usually limited to a black and tan coloration.

The Carlin Pinscher is patient, pleasant, playful and outgoing. It is best to socialize the Carlin Pinscher with humans and other dogs when young to prevent it from becoming overly aggressive or suspicious of strangers. The Carlin Pinscher is fond of children but its personal space must be respected. It should be supervised around young children for its protection and theirs because this dog will bite and scratch when harassed.

The Carlin Pinscher requires obedience training. Carlin Pinschers need firm, consistent instructions and must be taught who is in charge from a young age.

The Carlin Pinscher does not require an excessive amount of physical exercise, but must have regular mental stimulation. It enjoys obedience exercises, tricks, jogs, and fetching. The Carlin Pinscher should be kept in a yard with a tall fence to prevent its inevitable escape attempts from proving successful.