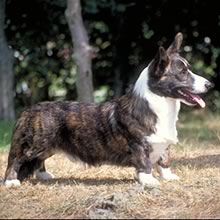 The Cardigan Welsh Corgi has a shoulder height of 30 cm (12 in) and weighs 11-14 kg (25-30 lbs). It is nearly twice as long as it is tall. Cardigan Welsh Corgis have long, rounded, upright ears and a slightly flat skull. They have a flat back, low set and low carried tail which is not docked, and large, round feet. The Cardigan Welsh Corgi is similar in appearance to a fox or a short-legged German Shepherd. It is distinguished from the Pembroke Welsh Corgi by its larger ears, undocked tail, and heavier set.

The Cardigan Welsh Corgi should be brushed occasionally to remove dead hairs and bathed only as necessary. It has a life expectancy of 12-15 years. It is susceptible to eye problems such as PRA and glaucoma. Obesity in the Cardigan Welsh Corgi can lead to serious health conditions, so proper nutrition and exercise are important. Another potential health issue is Canine Degenerative Myelopathy, which may be present if the dog stands with its feet abnormally close together. The Cardigan Welsh Corgi can live outdoors but prefers to split its time between life indoors with the family and playtime in the yard.