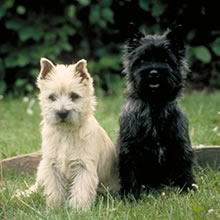 The Cairn Terrier is considered to be one of the oldest terrier breeds. They originated in the Scottish Highlands and the Isle of Skye. Cairn Terriers were originally lumped in with the Scottish Terrier and the West Highland White Terrier as one breed. However, in the 1900's the three began to be bred separately and individual breeds were developed. The Cairn Terrier's principle duty is that of a ratter. They were utilized by farmers to catch and kill mice, squirrels and other rodents. The Cairn Terrier was originally known as the Short-haired Skye Terrier until they were brought to the United Kingdom's dog show in 1909. Sky Terrier breeders did not take well to the name and a compromise was reached with the name Cairn Terrier. The Cairn Terrier was given his new name for the frequent trapping of fox and badger in the very common cairns(man made piles of rock used for marking locations) all over Scotland. They would wedge their way inside and bark at their prey until the farmer came to claim it.

The Cairn Terrier has a weather resistant double coat. The top coat will feel rough to the touch, however the undercoat is quite soft. The coat can come in nearly any color with the exception of white. The common coat colors for the Cairn Terrier are black, brindle, red, sand and shades of gray. You will typically notice darker hairs around the muzzle, ears and tip of the tail. The Cairn Terrier's coat will change color frequently throughout the dog's lifetime, so you may not know the final coat color for several years.

The Cairn Terrier is a cheerful, friendly and loyal breed that makes a fine family companion. They are known to do well and enjoy playing with children. However, they will not tolerate mistreatment and so may not be ideal for families with small children. Also, due to the Cairn Terrier's love of the hunt, they will be likely to chase small animals whether it be a nuisance in the yard or a family pet. The Cairn Terrier is often referred to as a big dog in a little dog's body. This is because the Cairn Terrier will take on a much larger dog without flinching. This often does not end well for the Cairn Terrier and so they should always be kept on a leash when not in a fenced safe environment.

The Cairn Terrier requires a good deal of regular grooming. Their coat requires brushing several times throughout the week to prevent matting. They should be bathed once a month and brushed while the hair is wet as well. The Cairn Terrier's coat should only be hand stripped and never be cut, as this could damage the coat. Apartment living agrees with the Cairn Terrier, as they are quite active indoors. As long as they are regularly exercised, the Cairn Terrier does not require a yard.

The Cairn Terrier requires a firm but never harsh pack leader. Obedience school is recommended for this breed, as they can be quite stubborn and will exert independence from a timid leader.

The Cairn Terrier is very energetic, so it must have opportunities to run and jump and play. They should be taken on regular daily walks to exert excess energy. Let your Cairn Terrier run in the open countryside, but be sure that the dog is trained to return when you call before doing so.