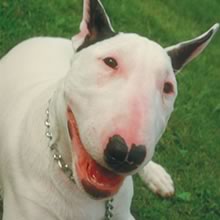 In the early 1800s it was popular to cross Bulldogs with terriers, and by 1830 fighting between bulls and Bulldogs was a popular sport. Later they crossed the Bulldog with the Old English Terrier, mixed with some Spanish Pointer to increase its size, which produced the Bull Terrier breed. The Bull in Bull Terrier derives from the popular practice of bull-baiting. After dog fighting was abolished, Bull Terriers were bred with the Dalmatian to produce a white colored strain, then again with the Staffordshire Bull Terrier to reintroduce color. Both the white and colored types increased in popularity as pets, and both strains remain today. Famous Bull Terriers include the Target mascot Bullseye, Spuds MacKenzie, who was used in Bud Light commercials (and later discovered to be a female!), and Patsy Ann, a Bull Terrier from Juneau, Alaska famous for unfailingly predicting the impending arrival of ships to port.

The Bull Terrier has a shoulder height of 53-56 cm (21-22 in) and weighs 20-27 kg (45-60 lbs). The Bull Terriers head and muzzle are very distinct in appearance--ovular from the profile, with a long skull curving deeply down to the nose with no discernable stop (point at which forehead and muzzle meet). Bull Terriers have small, deeply set eyes, positioned near the middle. Their ears are small, triangular, and erect. They have short, powerful backs, flat tails and small, round cat feet.

Bull Terriers have thick, short-haired coats. Theyre primarily white or multicolored and often have highlights in their fur, but some dogs are red, broken black, or fawn colored as well. Many Bull Terriers have head markings, like a spotted area by the eyes or white strip on the nose. This breed sheds a lot, especially when the weather changes. Brushing them weekly and bathing them every other month will keep their coats shiny and clean.

Bull Terriers make great companions for children. They love to play and will befriend just about anyone. With socialization from a young age, these dogs get along with cats and other pets, but they may be more aggressive if theyve had bad experiences in the past. Bull Terriers need to be watched to keep them from playing too rough with other dogs and small children. Theyre indoor dogs, but if theyre left alone for too long or dont get enough exercise, you may come home to unpleasant surprises.

The Bull Terrier should be given an obedience course when young. Bull Terriers are very strong when fully grown, which makes them difficult to train as adults. Handlers must be patient and understanding, as the Bull Terrier learns quickly but has a stubborn streak.

Bull Terriers get restless easily and need lots of exercise. Without it, they tend to become hyperactive and destructive, so an active dog is a happy dog. Bull Terriers love long walks and runs, preferably off-leash. However, they can be dominant toward dogs they dont know, so keep an eye on them at the dog park and in community areas.