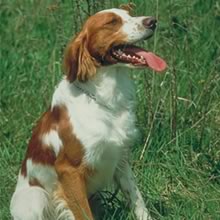 The Brittany (also known as the American Brittany, Brittany Spaniel, and Epagneul Breton) originated in the Brittany province of France in the 1800s from crosses of the English Setter and small Spaniels. It is a skilled bird hunter with excellent scenting abilities. The Brittanys pointing and retrieving skills and high level of obedience made it popular among hunters, particularly poachers. Brittanys were first imported to North America in the 1920s and recognized by the American Kennel Club in 1934 (the registered name was changed from Brittany Spaniel to Brittany in 1982, out of recognition of its more setter-like hunting style), but took a while to catch on popularity due to the absence of a long tail. The Brittany has slowly risen in popularity due to its small size, easygoing personality, and excellent hunting skills. It is today the most popular pointer in field trials.

The Brittany has a shoulder height of 43-53 cm (17-21 in) and weighs 14-18 kg (30-40 lbs). It has a brown or pink nose, small, highly set, triangular ears, and an alert expression. Brittanys are compact and muscular with long legs and naturally short or cropped tails up to 10 cm (4 in) in length. They are approximately as long as they are tall. Some breeders distinguish between American Brittanys, which are taller and faster for the wide American plains, and French Brittanys, which are more similar to Spaniels.

The Brittany has a medium length, dense, flat or wavy coat with feathering on the legs. The most common color is white with orange markings. Other colors for Brittanys are white and liver, white and black, liver tricolored and black tricolored. Any pattern may be solid or roan with ticking. Some registries allow black Brittanys.

The Brittany requires little maintenance; only weekly grooming with a brush is required. The Brittany has a lifespan of 12-13 years. It is a generally healthy breed, but susceptible to some common canine maladies such as hip dysplasia (malformed hip joint which can cause lameness or arthritis), epilepsy, and ear infection.

The Brittany has a well deserved reputation for being easy to train due to its intelligence and obedience. It has a strong desire to please its master and is usually ready to accept direction. Brittanys are highly sensitive; any discipline beyond a harsh word or stern look is strongly discouraged and unlikely to prove beneficial.

The Brittany requires an hour or more of serious exertion every day. It is not sufficient to take the Brittany for walks, which makes it unsuitable for apartment life. The Brittany is happiest living where it can run freely and take part in field sports.