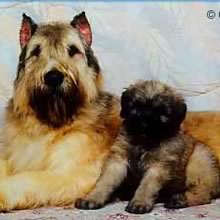 Training for the Bouvier Des Flandres is no arduous task. The breed is quite intelligent and will remember any command that is learned for the rest of their life. A firm and consistent pack leader is a necessity with this breed. Obedience school is recommended at a young age to assist in ensuring that it is very clear who the boss is. The Bouvier Des Flandres must always be made to heel at your side when walking, because to a dog, whoever is in front is in charge. This breed requires an experienced and dominant pack leader, as they can become inappropriately dominant towards humans otherwise.

The Bouvier Des Flandres is a fairly energetic dog that will require a good long daily walk or run. They should not be made to run during the younger years of development though. This could cause issues with muscle and skeletal growth.