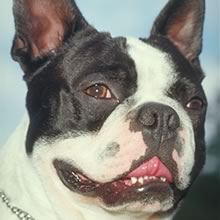 The Boston Terrier's coat is very short and fine with moderate shedding. The most common coat colors for the Boston Terrier are black, brindle, seal or a combination of the three over a white background. Other colors such as liver, cream, red and brown are possible, but far more rare. These additional colors, while eligible for American Kennel Club registration, are not able to be shown in the ring. The white on the body of the Boston Terrier should cover the chest, muzzle and neck. White should also be present up to half way up the forelegs and up to the hocks on the rear legs. There should be a white blaze that reaches from the muzzle towards the top of the head, but should not touch the eyes.

The Boston Terrier will adapt well to apartment living and requires only a small area to play outdoors, as they are relatively inactive inside. The Boston Terrier's smooth short hair requires minimal grooming. They require brushing with a firm bristle brush and baths only when necessary. Their eyes and faces will need to be wiped clean on a daily basis. The Boston Terrier's eyes and ears should be checked regularly for foreign objects as well as ticks.

The Boston Terrier is very intelligent and will learn quickly from a consistent pack leader. It is very possible for this willful breed to develop Small Dog Syndrome, so it is necessary to exert yourself as the pack leader from a young age. The Boston Terrier will respond best to a firm, yet affectionate approach to training.

The Boston Terrier requires a good long daily walk and/or a good romp in a fenced yard to keep them happy and in shape.