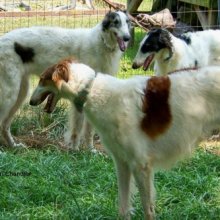 The Borzoi (pronounced boar-zoy, also known as the Russian Wolfhound) descends from Kazakh and Afghan sighthounds. Borzoi comes from Borzaya, the Russian term for quick dog; in Russia Borzoi (also used as the plural) are considered to be several distinct breeds such as the Tazi, Hortaya, and Krimskaya. Borzoi were bred over many centuries to chase hare for the aristocracy. They were crossed with sheepdogs and bearhounds in the 1500s for increased size and coat thickness to improve wolf hunting abilities and stamina in cold weather. Borzoi were treasured estate dogs, pampered by serfs for grand wolf hunts with dozens of attendants and observers in tow. A trio of two males and a female would chase down the wolf and hold it until the hunters arrived. Just prior to the 1917 Revolution, the Borzoi was incredibly popular; in fact, it could not be legally sold, only received as a gift from the Tzar. The most famous breeder was Grand Duke Nicholas Nicolaievich, commander of the Russian armies in World War I. Most Borzoi were slaughtered after the 1917 revolution as a symbol of affluence. The survival of the breed was mostly due to the handful of Borzoi that had been exported to North America and Europe. Today, Borzoi are a moderately popular pet in the U.S. and a highly popular show and hunting dog. The Alfred A. Knopf publishing house is known for its Borzoi logo, and the film and book versions of War and Peace contain a wolf hunting scene featuring Borzoi.

The Borzoi has a shoulder height of 70-82 cm (27-32 in) and weighs 27-48 kg (60-105 lbs). It is similar to the Greyhound in appearance, with a long, narrow skull and muzzle, small, floppy ears, and almond-shaped, dark eyes. Borzoi have a curved back, deep chest, long, narrow hare feet, and a long, curved tail. Their curved back and kind face gives the impression of elegance and agility.

The Borzoi has a soft coat consisting of medium-length hair with varying degrees of waviness. The coat is thick and fluffy at the neck, giving the appearance of a mane. The Borzoi has a soft undercoat which thickens in cold climates and sheds in warm climates. The coat can come in any solid color or color combination; typical colors are white, brown and white, or black and white.

The Borzoi coat needs grooming several times a week. Excess hair between pads of the feet must be trimmed. The Borzoi has a life expectancy of 10-12 years. Borzoi are generally healthy and are free from the hip dysplasia that plagues many breeds. Some Borzois are susceptible to bloat, which can be prevented by spacing meals throughout the day, placing the dogs dish on a raised platform, and avoiding exercise immediately after eating. Borzoi can live outdoors in warm climates as long as proper shelter and bedding is provided, but prefer to live indoors.

The Borzoi is not the most naturally obedient dog, but if trained in an atmosphere of mutual respect it will learn what is expected of it. It becomes bored quickly with repetitive tasks. Borzois excel in competitive obedience and agility trials.

Although calm and very quiet indoors, the Borzoi needs lots of space outdoors to run around. A large, fenced in yard is highly recommended.