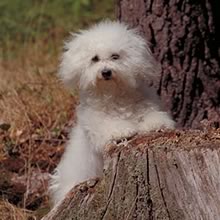 The Bolognese (pronounced bowl-owe-KNEES), shares its early ancestry with the Bichon Frise and the Havanese, likely descending from Bichon-type breeds in southern Italy in the 11th and 12th century. It is named after the Italian city Bologna, and sometimes called the Bichon Bolognese. The Bolognese became a popular pet among royalty in Spain when Cosimo the Elder, an influential political leader from Florence, Italy, brought several with him as gifts during his visits in the 1400s. Over the next few centuries, the Bolognese increased in popularity throughout Europe, appearing prominently in paintings by artists Francisco Goya and Tiziano Vecelli. However, its numbers dropped off dramatically in the following years. Recently Italian breeder Gian Franco Giannelli has led an effort to revitalize the Bolognese, but it remains a rare breed with less than 1,000 estimated Bolognese in the United States. The Bolognese is not yet recognized with the American Kennel Club, but is registered with its Foundation Stock Service. It made its first appearance at Crufts, the worlds largest international dog show, in 2002. PLEASE NOTE: This breed has been accepted for recording in the AKC Foundation Stock Service (FSS). This is simply an avenue to maintain reputable records regarding the breeds development. This breed is not eligible for AKC (American Kennel Club) registration.

The Bolognese has a shoulder height of 25-30 cm (10-12 in) and weighs 2-4 kg (5-9 lbs). It has large, dark eyes and nose, square muzzle, white teeth, pincer or scissors bite, and long, highly set ears. Bolognese have a deep chest and tail curled over the back. The Bolognese is a small, squarish dog which is about as tall as it is wide.

The Bolognese has a very distinctive coat. It is a large mass of long, straight, fluffy locks which covers the entire body, slightly shorter on the face. The Bolognese has a woolly, not silky, texture, and is never clipped or cut. There is no undercoat. Bolognese are pure white without any markings or shadings. The Bolognese is hypoallergenic.

The Bolognese enjoys the company of other dogs, pets, and children. Young children should be supervised around the Bolognese (as with all small breeds) for its protection. As it enjoys being with its family, the Bolognese should not be left alone often. It is reserved, but not aggressive, with strangers.

The Bolognese is eager to please and usually easy to train. It does well with obedience training, especially when young.

The Bolognese can have most of its exercise needs met by indoor play, but it loves long walks and playtime in a fenced-in yard. The Bolognese is well-suited to apartment life.