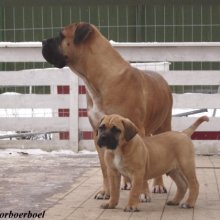 The Boerboel (farmers dog in Afrikaans) originates in South Africa. It is a guard dog which was created by mixing various African and European breeds, possibly including the Bulldog, Bullmastiff, and Rhodesian Ridgeback. By some reports, the Boerboel was brought to South Africa by Jan van Riebeeck, the founder of Cape Town. Boerboels were used to protect diamond mines by the De Beers Corporation and for personal protection by Dutch settlers during British rule. Today, most are bred in South Africa.

The Boerboel has a shoulder height of 64-70 cm (25-28 in) for males and 59-65 cm (23-26 in) for females. Boerboels weigh 70-90 kg (154-200 lbs). They are a big, solid, powerful breed with a distinctive broad (but not oversized), tight skinned head, a muscular neck and shoulders, and flat back. The tail is normally docked. Boerboels have a broad, black muzzle, large nostrils, brown eyes, V-shaped ears, and white teeth which form a scissors bite. Their large head and filled-out face is considered their identifying feature. The Boerboel is a powerful, agile breed with a strong masculine or feminine appearance according to sex.

The Boerboel has a short, dense, and sleek coat which is brown, red, yellow, black, fawn, or brindle (light/dark stripes), with possible white markings on the head, neck, chest, and legs. A black mask is preferred. The Boerboel is an average shedder.

The Boerboel has very strong watchdog and guard dog instincts. It has a great instinct for danger and will guard its owners and their property with its life. Boerboels are playful and affectionate with those they love.

The Boerboel is not difficult to groomonly occasional brushing is required. Bathe only when necessary. Boerboels are generally healthy, but like other larger breeds they are susceptible to hip dysplasia and bloat. Avoid overfeeding and space meals throughout the day. The Boerboel has a life span of 12 years.

The Boerboel is an intelligent breed which requires consistent, firm, positive reinforcement. The Boerboel should have a dominant owner who can be strict when necessary and ensure the dogs obedience.

The Boerboel loves to play. It requires daily exercise, such as playtime in a large, fenced yard or a long walk. The Boerboel should always be walked on a leash and watched closely around strangers. Due to their size and exercise needs, the Boerboel is not recommended for apartment life.