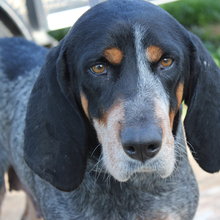 The Blue Tick Coonhound has a short, slightly coarse, glossy coat. Its distinctive navy blue coat comes from black and white mottling. Black markings on the head and ears are permissible; black is also allowable on the body but dark blue should predominate. The Blue Tick Coonhound may have tan dots on the forehead and cheeks and/or dark red on the chest, lower legs, and feet.

The Blue Tick Coonhound is intelligent but can be challenging to train. Its tendency to mark its territory makes house training difficult.