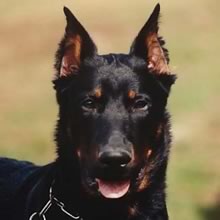 The Beauceron originated in the north of France and records of their existence can be traced all the way back to the Renaissance. They are accomplished working dogs primarily utilized as flock guards. The Beauceron is also known as Berger de Beauce, Bas Rouge, Red Stocking and Beauce Shepherd. Originally lumped in with the Briard, the Beauceron gained individual recognition in 1911. Also, it is possible that the Beauceron breed may have had a hand in the creation of the Doberman Pinscher you know today. The Beauceron is a very versatile breed that was also utilized by the military for purposes such as detecting mines, locate wounded, carry food and ammunition as well as carry messages. The Beauceron is gaining popularity as a watchdog and family pet, however, they are still quite rare and have a great many other talents to explore.

The Beauceron will reach heights from 24 to 27.5 inches and will typically weigh anywhere from 66-110 pounds.

The Beauceron is most commonly seen in with black and tan coloring, but is also seen in a harlequin of tan and gray. Colors such as tawny, gray and black/gray have all been banned by the breed standard. The undercoat of the Beauceron is soft and silky while the outer coat is dense and coarse and should feel rough to the touch. Harlequin coats should exhibit no white coloring.

Beaucerons are good with children if they have been brought up around them. They are sociable with other dogs but are very territorial and do not tolerate intruders. The Beauceron is very intelligent and quick to learn. They are eager to please their pack master, making them very easy to train. However, the Beauceron will take charge and exert himself as the leader of the pack if it is not made clear enough that the humans rank above them.

Occasional brushing and grooming, particularly during times when it is shedding, is required.

The temperament and willingness to work of a Beauceron makes it very easy to train. As stated previously, the Beauceron is eager to please and will be obedient to an established pack master. This breed is very strong willed, however, and does require and assertive and firm pack master. The Beauceron must be made to heel beside their pack master and enter a door after the pack master. This shows the dog the order of the pack. All humans in the home must rank higher than the dog to prevent him from believing they lead the pack.

The Beauceron will not fair well in an apartment setting. Due to this breed's natural purpose of guarding and herding, any exercise similar to this will be a great asset to the Beauceron, allowing them to work their muscles and their mind. The Beauceron should not be left alone without ample exercise for an extended period of time, as they may become destructive. The Beauceron will take care of their daily exercise on their own in a flock guarding/herding setting. However, outside of this setting they may require a couple daily walks in addition to outdoor play.