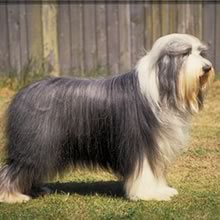 The Bearded Collie (affectionately called Beardie, after the thick hair under its chin) most likely descends from a group of six Polish Lowland Sheepdogs which were delivered to Scotland in 1514, where they were cross-bred with local Scottish dogs. The result was a large breed capable of herding sheep and driving cattle on the Scottish plains. These dogs were prized possessions whose owners were reluctant to give them up, but they were eventually exported to England and America in the 20th century. A woman named Mrs. G. Olive Willison ordered a Shetland Sheepdog, but was accidentally delivered a Bearded Collie named Jeannie. Mrs. Willison became fascinated with the breed and bred Jeannie with another Beardie, the two of whom became the source of the modern breed. Bearded Collies increased in popularity when a Beardie named Potterdale Classic at Moonhill won best in show at Crufts, the worlds largest dog show, in 1989. Famous Bearded Collies include Cole, star of Disneys The Shaggy Dog, and the Brady Bunchs dog Tiger.

The Bearded Collies big, shaggy coat is its defining feature. It has a dense, wooly, undercoat and a weatherproof outer coat composed of straight, long, rough hair. The shaggy coat is thick under the chin (hence Bearded). The Bearded Collie can be various shades of brown or gray, with white on the chest, muzzle, tail, or feet, and possible tan points. Bearded Collies are usually born with a solid colored coat which lightens to a gray or cream, then darkens to its adult color.

The Bearded Collie gets along equally well with children, other household pets, and even strangers. It should be watched around young children because of its high energy level and considerable size.

The Bearded Collie requires a great deal of grooming. Its hair must be brushed and combed at least twice a week and parted along the back. Bearded Collies have an average life span of 12-13 years and litters of 5-9 puppies. They are susceptible to arthritis and skin conditions.

Bearded Collies are easy to train as they learn very quickly, but they do have a stubborn streak. The Bearded Collie responds best to a gentle, kind approach. They are able to learn a wide variety of tricks as well as herding, dog agility, and competitive obedience tasks. Obedience training is highly recommended. Beardies may be difficult to house train.

The Bearded Collie requires a substantial amount of exercise. It enjoys being taken on long walks in the country. It will behave best when taken exercised on a daily basis. Bearded Collies are boisterous indoors and as such probably not well suited for apartments or very small living spaces.