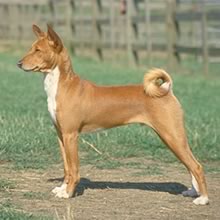 The Basenji (also known as an African Bush Dog, Congo Dog, or Congo Terrier) is an ancient breed which can be seen depicted on stone tablets in Egyptian tombs. The modern breed originates in the African Congo (Basenji means bush thing), where they were used as pack hunters to chase game into nets. Basenjis were imported to England in the 1930s, then to America. They increased in popularity after being featured as the title character of a popular 1950s book and movie, Goodbye, My Lady. Some Basenjis from Africa were imported in the 1980s, widening the gene pool and introducing the brindle color to the breed.

The Basenji has a shoulder height of 38-43 cm (15-17 in) and weighs 9-12 kg (20-26 lbs). It has many small wrinkles on its forehead, almond shaped eyes, and small, erect ears. Basenjis have short backs, tiny feet, and very curly tails. They have long necks which are similar in appearance to a deers.

The Basenji has a short-haired, fine, dense coat that comes in red, black and tan, or brindle (black stripes on red). All have white feet, chest, and end of tail, and some have white legs and collar. The Basenji sheds little and is a great breed for owners with allergy problems.

The Basenji can be trusted with children, but does not make an ideal playmate. Basenjis must be socialized at a young age so that they know that other household pets are not prey. They get along quite well with other Basenjis. They are good humored but can be mischievous, especially if not exercised or socialized properly. The Basenji is highly territorial and unfriendly around strangers. The Basenji will circle a person or animal when it feels threatened.

The Basenji cleans itself with its paws like a cat, so bathing is generally unnecessary. Occasional grooming with a coarse rubber brush to remove dead hairs is required. Basenjis are susceptible to a kidney disease known as Fanconi Syndrome which can be identified by excessive drinking and urination. Basenjis live a long 13-14 years and have breeds of 4-6 puppies. They are amazing climbers and jumpers, so the yard must provide sufficient enclosure. They are fearless and should not be allowed to run free around roads.

The independence of the Basenji can make it difficult to train. It is not known for its obedience. However, Basenjis are eager to please and can learn quickly due to their high intelligence.

The Basenji requires daily exercise, such as a long walk, games with its owner, or playtime in an enclosed yard. Basenjis should live indoors and do well in an apartment. When running at full speed, Basenjis utilize a rare double suspension gallop, in which all four feet leave the ground at the same time twice per stride.