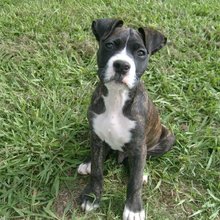 As mentioned previously, the Banter Bulldogge is an intelligent breed that should be relatively easy to train. The Banter Bulldogge's eagerness to please will always benefit the leader of the pack. However, it is still necessary to maintain an air of authority when dealing with your Banter Bulldogge. Any dog that senses weakness in their pack leader will likely attempt to claim the role for themselves.

The Banter Bulldogge can do well living in an apartment, however, they must receive regular daily exercise. The Banter Bulldogge is relatively inactive when indoors, and so must be taken on walks or to a safe, fenced area to play in order to exert their excess energy. Failure to do so may result in pent up energy that can turn to destructive behavior.