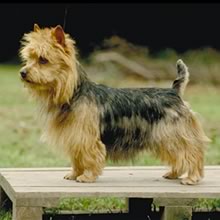 The Australian Terrier (affectionately known as Aussie), developed in Tasmania, is the first recognized Australian breed. Its ancestors were a mix of now-extinct breeds which also generated the Yorkshire Terrier, Dandie Dinmont Terrier, Scotch Terrier, and Manchester Terrier. The breed came to be called the Rough Coated Terrier, then the Broken Coated Terrier due to its distinctive blue and tan coat. It was used as a herding and guard dog and for hunting snakes and pests. The Australian Terrier was imported to America beginning in the 1920s and was first recognized by the American Kennel Club in 1960.

The Australian Terrier has a shoulder height of 23-28 cm (9-11 in) and weighs 4-6 kg (9-14 lbs). It is a small Terrier with a long head, high V-shaped ears, and small, dark, oval eyes. It has a black nose, scissors bite, and slight stop (point at which the muzzle meets the forehead). Aussies have a highly set tail carried vertically and small cat feet. They are longer than they are tall (called low set).

The Australian Terriers coat consists of straight, harsh, weatherproof hair which is 5-7 cm (2-3 in) thick. It has a soft undercoat and thick ruff on the neck which adds character to its appearance. This breed is known for their blue and tan color, but the coat can also be sandy or solid red. The Australian Terrier sheds little.

The Australian Terrier gets along fine with children, provided they are respectful. Aussies are calm and outgoing, making excellent companions. They have a high prey instinct, especially for small cats or rodents, and should be socialized when young if they are intended to live with other pets. Australian Terriers require frequent human companionship.

The Australian Terrier must be plucked every three months and groomed with a brush and comb once a week. Dead hairs should be stripped several times a year to keep the coat in optimal condition. Aussies are susceptible to eye cataracts and ear infections. They can live outdoors in warm or temperate areas as long as sufficient socialization is provided. The Australian Terrier has a life span of 10-13 years and litters of 2-6 puppies.

The Australian Terrier sometimes has its own agenda, so training must be strict, but not harsh. Australian Terriers learn quickly and can pick up a number of tricks and activities. They excel at dog agility and earthdog competitions, in which they must scent and track prey through a series of underground tunnels.

The Australian Terrier can adapt to a variety of living situations, but prefers environments where it can romp and play. Australian Terriers require a lot of exercise for their size. They can tolerate apartment life if sufficiently exercised.