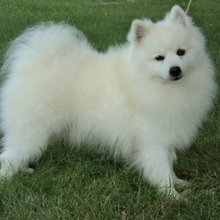 The standard American Eskimo Dog has a shoulder height of 38-48 cm (15-19 in) and weighs 9-16 kg (20-35 lbs). American Eskimo Dogs have a wedge shaped head and long, wolf-like muzzle. They have alert, triangular ears and black lips and nose. They are slightly longer than tall, with oval feet and bushy tails which hang over the back.

The American Eskimo Dog is very sociable with its family and good with children, other dogs, and household pets. It may bark at strangers, but it is not aggressive.

The standard American Eskimo Dog needs a good workout every day and should be taken for a long jog or walk. Provide plenty of water and shade during exercise to avoid overheating from the heavy coat. Eskies enjoy dog sports. Without interaction they may become bored and destructive.