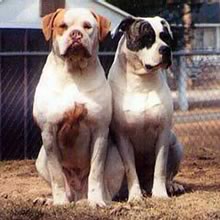 The American Bulldog is affectionate toward children if properly trained and socialized. It can be somewhat standoffish or aggressive around strangers. Because they were originally bred to bring down bulls and other livestock, American Bulldogs have a strong aggressive instinct with other animals. They should be properly socialized when young.

Consistency is important, but the American Bulldog is highly sensitive to the tone of its handler's voice, making training a fairly simple process. It is inquisitive and quick to learn simple tasks, yet unpredictable as it is a bit stubborn on occasion. Training should begin as early in the American Bulldog's life as possible. It retains what it learns for a very long time.