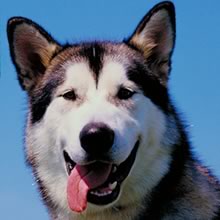 The Alaskan Malamute hails from the Arctic region, where it depended on its thick coat to survive the extreme cold. It was first recorded living among the Mahlemuts in Alaska (Malamute means village of the Mahle). The Alaskan Malamutes were bred for size and power to assist in hauling the bodies of seals and polar bears back to the village. They performed an essential function and became valued workers and companions. The Alaskan Malamute was endangered by interbreeding during the Alaskan gold rush of 1896, but was rescued by a breeder and Alaskan Malamute enthusiast in New England in the 1920s, and thereafter increased in popularity. Alaskan Malamutes achieved fame by assisting in Admiral Byrds trek to the South Pole in 1933 and served as pack dogs and search-and-rescue dogs in World War II. They are the prototypical strong, unrelenting sled dog.

Alaskan Malamutes have a shoulder height of 58-63.5 cm (23-25 in) and weighs 34-38.5 kg (75-85 lbs). With broad heads and heavy bones, they are built for pulling weight. Alaskan Malamutes have large muzzles, brown, almond shaped eyes, and triangular, rounded ears. They have straight backs and large feet, with plumed tails which curl over the back. Giant Malamutes which weigh over 140 lbs are sometimes bred, but not as show dogs. Alaskan Malamutes are slightly longer than they are tall.

The Alaskan Malamute has a dense double coat. The outer coat is thick and coarse and the under coat is greasy and wooly. The coat is either pure white or a mixture of white with grey, sable, black, or red, with white legs and muzzle. Alaskan Malamutes grow their coat in winter and shed in spring.

The Alaskan Malamute does not require frequent grooming, but a good comb-out with a coarse comb is required when shedding. Alaskan Malamutes have litters of 4-10 and a life span of 10-12 years. They are susceptible to musculoskeletal and dermatological diseases. They are generally unsuited to hot climates, and should be given plenty of shade, water, and cooling when living in warm areas. Alaskan Malamutes will eat whatever they are fed, so avoid overfeeding to prevent obesity.