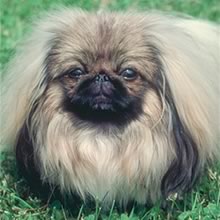 The Pekingese is affectionate and noble, but not particularly fond of strangers. It has a stubborn, independent reputation. However, once it bonds with its owner, it is wholly devoted. Pekingese tend to bond most strongly with one person. As Chinese Empress Dowager Cixi said, Let it be lively that it may afford entertainment by its gambols; let it be timid that it may not involve itself in danger; let it be domestic in its habits that it may live in amity with the other beasts Let it comport itself with dignity; let it learn to bite the foreign devils instantly Sharks fins and curlew livers and the beasts of quails, on these may it be fedFor the days of sicknessgive it to drink a throstle's eggshell full of the juice of the custard apple in which has been dissolved three pinches of shredded rhinoceros horn. No wonder this breed is a little self absorbed! However, one thing the Empress did not mention is that Pekingese tend to snore.