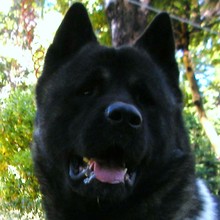 Akitas have a strong hunting instinct and are calm, spontaneous, and intelligent, making good watchdogs. They are quiet and dignified, with great power and attentiveness. Akitas are noble and kind, making excellent companions. They are generally obedient. Barking is infrequent; however they tend to make a mess when drinking!