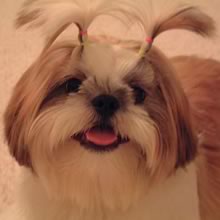 The Shih Tzu is an independent dog which is intelligent, dignified, lovable, affectionate, sociable, and cheerful. It is not as outgoing as most breeds. Shih Tzu seldom bark. James Mumford described the breed in American Shih Tzu magazine as A dash of lion, several teaspoons of rabbit, a couple of ounces of domestic cat, one part court jester, a dash of ballerina, a pinch of old man (Chinese), a bit of beggar, a tablespoon of monkey, one part baby seal, a dash of teddy bear and the rest dogs of Tibetan and Chinese origin.