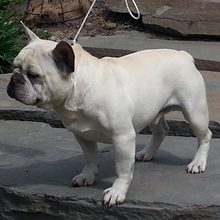 Find the perfect French Bulldog in Anderson, SC today! There are plenty of French Bulldog puppies looking for for a place near you to call home. PuppyFind is the fastest and easiest way to find a French Bulldog, and not to mention the most trusted. We've helped thousands of puppy lovers find their perfect pup throughout South Carolina since 2003. So what are you waiting for? Your French Bulldog wants to add a little wiggle to your life.
French Bulldog Puppies for Sale in SC